In the fall of 2009 I uploaded my first ever YouTube video. 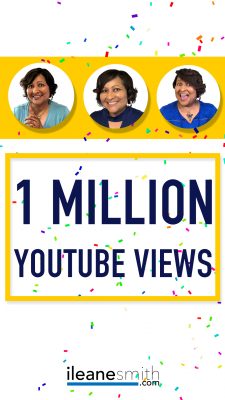 Nine year later, and over 300 videos later and I'm proud to see that I have over 1 million YouTube views on the Ms. Ileane Speaks channel. TO celebrate, the milestone I wanted to do something different. Actually it was something I said I would never do but I have to admit, I wish that I had tried it sooner. I used a “Green Screen”.

What is a Green Screen

A Green Screen is basically a way to change your background so that no one can see how messy your room is! Of course that is not the technical definition but that's why the everyday YouTube, like you and me, would use it. As you know I host a lot of live streams and many of my friends have tried to convince me to give green screens a try for years. Andrew Hatchett is the first one that comes to mind and I was thinking about him the whole time I was setting it up. That's why I got excited when the tool I use for my live streams, EcammLive, added the Green Screen option to their software. I look at it this way, I'm a beta tester for EcammLive so I'm obligated to kick the tires on this new feature!

Buy a Green Screen from Amazon or your local camera shop (that is if you can actually find a local camera shop) and set it up behind you. You'll need special software the uses a technology called “chroma key” to remove the green color and make it transparent.

The technique has been used heavily in many fields to remove a background from the subject of a photo or video – particularly the newscasting, motion picture and videogame industries. ~ https://en.wikipedia.org/wiki/Chroma_key

Your software will allow you to replace the green with a still image of your choice (or in some cases a gif or movie clip).

Through the magic of green screen or chroma key technology, you can be transported so that it appears you are anywhere in the world; on the beach, in a TV studio, inside of a black hole in space! Since I'm new to all of this, I didn't feel the need to go anywhere exotic. I wanted something really cool, like an office space with computer monitor so that I could Photoshop my branding on top of the screen. I sifted through tons of choices before found an image I liked in my stash of royalty free graphics that I keep on my hard-drive. As it turned out, this idea worked out well because with EcammLive, I can pin comments from my audience as an overlay on screen, so I was able to position them directly over the monitor. It was a bit of serendipity that turned out way cooler than I had originally planned.

Watch the video so you can see the look I ended up using for my 1 Million Views Celebration.

The journey for me started with a cheap headset mic from Radio Shack. I would never come on cam back in those days but listen in to hear stories of how I added on layer by layer to improve the delivery of my content including:

In the video live stream I answered a lot of questions blog versus YouTube, copyright strikes, internet speeds for live streaming and a whole lot more.

If you have a question, want to leave feedback that might be featured on the podcast, you have three options: