Google made the announcement on their Android Blog in a post titled “Podcasters, welcome to Google Play Music“. This means that after years of patiently waiting for a native podcast app on Android, the wait is over, and at long last: Google embraces podcasting! 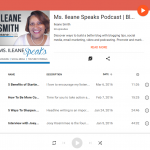 After hearing the news; first from Daniel J. Lewis over on YouTube, and then later from Rob Walch and Elsie Escobar on The Feed the official Libsyn podcast, I quickly rushed over to tell my friend on Blab. I also wanted to share my initial reaction and discuss the impact this will have on podcasting as a whole. I'm sure that over time I be able to share more “big picture” ideas and thoughts but a few things popped into my head right away so I wanted to Blab about them. 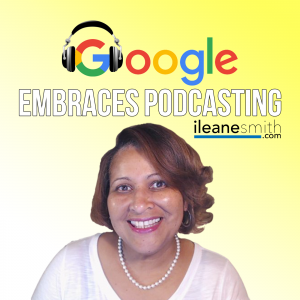 Friends, Bloggers, Podcasters, and Humans, they just announced yesterday that Google is now accepting podcasts in the Google Play Store, and I just wanted to go over with you guys, a few things that come to mind immediately, when I heard that news.

First of all, as I mentioned earlier, it was wonderful to hear Mr. Rob Walch, who is the VP of Podcaster Relations over at Libsyn Podcasting Host, they host your media files for your podcasts, since 2004, And he did a special episode of The Feed, which is their podcast, along with my good, good, friend, Elsie Escobar, and literally Rob was eating paper, because he’s eating his words because he thought that Google would never embrace podcasting, but, my friends, the day has come and Google has decided to include podcasting in their Google Play Store.

Now, it’s not available for us to listen to yet, and right now it’s US only, and you can submit your podcast now so that when it goes live, and we didn’t get a date, but they said as soon as possible, and so we can pretty much, y’know, be certain that Google will probably not drag their feet, and I would think within a month or less, maybe even a week or so. They probably want to see how many podcasters rush to submit their shows, before they give a deadline. So, they may have a number in their head, just like our friends at Team Blab have a number in their head of how many people they want to have signed up for their platform before our friend Shaan shaves his beard.

So, the first thing that came to my mind – well, actually, these are not in order, because I had a lot of things, going, swirling in my head, so – Feedburner. Yes, Google owns Feedburner and for the last 3 years, I’ve been hearing people that said “Don’t use FeedBurner anymore,” although, I didn’t listen, because I’ve been using Feedburner to get my feed over into iTunes, and people got worried because Google had made the decision to shut down their Google Reader, and people kind of assumed, and since Feedburner hadn’t been updated since Google acquired it, that Google was going to get rid of FeedBurner, and they didn’t want all these podcasters to be left hanging in the breeze without Feedburner. So, I think this pretty much should quiet any concerns or worries about Feedburner going away, if anything it will probably get an update. So stay tuned for that. That’s just my prediction.

Video podcast: No where in the announcement, and also my friend Ray Ortega didn't mention it on his podcast, which is the Podcaster Studio, and this question did not come up, but I’m going to assume that video podcasts are not going to be accepted in the Google Play Store. But, you never know! Never thought audio was going to be in there, so hey, just stand back, and watch! Okay, and so there is the announcement also from my friend, Ray Ortega, from the Podcaster Studio.

Okay, so now, what are podcasters going to do? 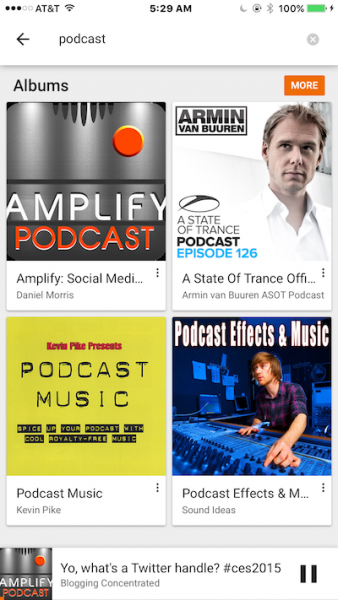 Rob Walch did ask the guy from Google, [Elias Roman], I really can not remember that guy’s name, but he did ask them if there was anyway to be featured and all that and the guy didn’t seem to be 100% clear on that answer. I think that there will be a featured section, but it may also be – oh, great, and Leslie, my friend Leslie Samuel, from Become A Blogger and The Learning With Leslie Podcast, has given us a link to the official announcement from Google, on the Android blog. So, you guys be sure to check that out, and I will check it out as soon as I get to work.

And, oh by the way guys, just want to let you know that this Blab is being embedded on my blog, if anybody wants to see what it looks like to have a Live Blab embedded on a blog, just go to ileanesmith.com/live. Okay, and, the reason why I mention Blab, even though we’re talking about Google embracing podcasting, is because Blab is a friend of podcasting, and they have always said that they want to go against Google, and in fact, maybe one day acquire Google. So, I think this is all coming together. Shaan VP happened to be in a Blab last night, when we were chatting about that, and he was a little surprised, and he was like “Interesting,” and next thing I know, he left the Blab. So, I’m assuming that means that he went somewhere to find out more info and see what he can get his team working on, from their end.

Will Podcasters Stop Talking about New and Notable?

So, the last thing, and I kind of mentioned it already, and that is the “New and Notable.” Yeah, it may not be a big deal to our podcasting friends, because, I gotta tell you guys, a lot of people have always felt that Apple is such a great friend to podcasters, but one thing that Google does far, far, better than Apple, and that is search.

I‘m only going to assume, that Google, or shall I say, finding a podcast in the Google Play Store will be much easier, and much more intuitive than trying to find a podcast on iTunes. So, you guys, marinate on those things, I’m just going to go over them really quickly, and that’s Feedburner, Video Podcasts, and the possibility that they may be coming, the App Store SEO, meaning folks trying to figure out how to get their podcasts to show up in searches of the App Store, and the fact that “New and Notable” will not be something that podcasters will be talking about a lot,

Oh, and one more thing that just occurred to me, the reviews! The review system is going to be a whole lot different now, because on iTunes, when you review a podcast – I mean most people don’t even have their username as their names, so, you have to add your name into the review so the podcaster will know who you are, I’m not one of those people, of course, but all these people have all these goofy names, but with Google Play, and since most of us who are rating apps over there, are probably kind of connected to our Google+ account, ya know, even though you probably don’t have that requirement anymore, there’s so many millions of folks who have already done that, so when somebody leaves you a review, you’re gonna know who that person is. And, when they, ya know, give your show a plus, I don’t know how it’s gonna look different from the pages for all of the other things that are in the Google Play Store. But, I think that’s something that I’m going to put on my list as well: the reviews.

So guys, with that, I bid you adieu, have a wonderful day, thanks so much for coming out, and for sharing this, and just, one more reminder, please follow each other, tweet at each other, and just get excited, because now, that you’re on blab, just know that you have all your audio files and so you can just start uploading them to a podcasting host, like Libsyn, or Blubrry, or even Soundcloud, even though it hurts me to say that, but yes, even Soundcloud.

Though, my main thing is I want to encourage you that now, now, now, is the time to get a podcast. Get started. Okay? Don’t miss the boat. you’re here on Blab so I know you’re an early adopter, and even though you’re not an early adopter of podcasting, the fact that your podcast will be in the Google Play Store, you are going to be on top of the game! 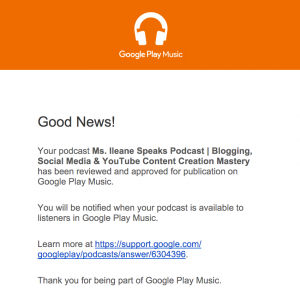 How to Submit Your Podcast to Google Play Music

The process for submitting your podcast feed to the Google Play store is very quick and easy.

Go here to enter your podcast feed url: g.co/podcastportal
When I submitted Ms. Ileane Speaks it was less than 24 hours (after I confirmed my show via email) to get the approval email from Google Play Music.

I encourage you to submit your show so you can get listed as soon as Google rolls this out. It's currently available in the U.S. only but I suspect that it will be open in other countries quickly.