Do you ever feel like your Tweets are being pushed down stream by the fire-hose of content that gushes down the Twitter pipeline? Truth of the matter is, you're probably right! But never fear, help is on the way!

In this post I'll show you how to find your most popular tweets in Buffer and how you can (and should) reshare them so the people who follow you, get more opportunities to engage with you and your content! I'll also introduce you to Buffer's Power Scheduler and show you a quick and easy way to queue up your top Tweets weeks in advance.

First a quick story about Buffer…

I met Buffer's co-founder Leo Widrich back in the day when the young start-up was just getting off the ground. He got in touch because he wanted to write a guest post for me and I was happy to oblige. I got excited when I heard about all the cool scheduling features Buffer offered for Twitter (at the time) and my readers loved the post too. I later put him in touch with Kristi Hines, whose blog was about 20 times more popular than mine (remember #FetchingFriday) and after Leo's Buffer was featured there, it wasn't long before Buffer was King of the Twitter Scheduling Hill!

After experimenting with a dozen or more social media scheduling tools (some free, some paid) I always seemed to come back home to Buffer. I remember when they purchased the DiggDigg social sharing plugin – I even did a video tutorial for DiggDigg back in 2012!

Fast-forward to the Buffer of today!

Leo and his partner Joel Gascoigne, have certainly come a long way and earlier this year the Buffer team introduced the awesome-sauce graphics maker for tweets called Pablo. 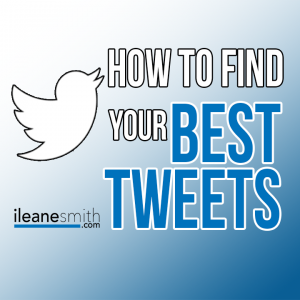 I did a tutorial for Pablo that you can check out here: How to use Pablo. Later on they expanded the toolkit inside Pablo to include Instagram and Pinterest image sizes too! Pablo is free to use so give it a try, there's really nothing to lose.

Here a list of all of the social profiles we can connect (up to a maximum of 10) and extra social goodness that comes along with Buffer on the Pro Plan:

Don't take Buffer for granted people. Add to the list of benefit, their outstanding customer service. Oh yeah and one more thing, let's not forget about the Buffer blog!

They should call that blog Content Marketing to the Max!!

Where to Find Your Best Tweets in Buffer

It's pretty simple – just head over to the Analytics tab in Buffer.

Not sure where to find it? I had a feeling you might say that. That's why I made this video tutorial for you. It's called How to Buffer Your Best Tweets.

Now what do you think about that? If you got a little lost it might be because you just started using Buffer or you never even tried it (they do have free plan you know). But that's ok. As long as you are using Twitter you can check for your most popular tweets from their analytics instead. Head over to http://analytics.twitter.com and you'll see a link for it. In the video I show you where to find the link at around the 1 minute mark.

Do you ever feel like no one is seeing your Tweets? Well in this video I'm going to show you a simple way to find your most popular and engaging Tweets so that you can share them again to make sure all your followers see them.

I'm going to show you how to do that using Buffer!

If you're already using Buffer is easy enough to log into the dashboard, head over to the Analytics Tab – and you can sort by:

From here you can simply ReBuffer the post. You can even choose to share on a different social profile. Another way you can do this is if you're not using Buffer then just go over to analytics.twitter.com. Click on view all tweet activity. Once we're in our Twitter analytics, we can choose Top Tweets.

And they say we want to just look at the Top Tweets from the last seven days – or you can choose by month. But we'll do the last seven days. Here's one that I'd like to retweet again because it's getting lots of engagement and it's got 1,400 impressions. So then I would just click that on. Now with this tweet we want to make sure that we get the image into the Tweet, so we're gonna right click on the image.

Then choose “Buffer this image.”

You can even do that a month or two out, just to keep something there in your queue with a tweet that you know is already getting a lot of engagement. If you want, you can go ahead and edit that Tweet, just to give you a little bit of variety. Then once you're all loaded up with all the times that you want you can just add all updates to your Buffer queue.

So there you have it; that's how you find your Top Tweets in Buffer or on your Twitter Analytics and then Buffer them out into the future!